In my last blog, I stated that “In my next blog, I will discuss epigenetics.”

People who believe our genes are the primary determinate of our intelligence, health, and chances for success in life, believe that achievement gaps between certain ethnic and racial groups are due in large part to genetics. For example, my 6th grade teacher recommended me for a middle 7th grade academic roster instead of a top roster even though I was a straight “A” student in his class. He did this because he believed in nature over nurture. As he told my parents and me, at a meeting where my parents were questioning his recommendation, “it was a well-known fact” that Negroes reach their intellectual peak by the 8th grade. Fortunately, my parents convinced the teacher to recommend me for a top 7th grade roster. Had they not succeeded; I would not have had the academic credentials to attend Princeton University where I became the first black student to graduate with the top honor that Princeton University awards to a graduating senior – the Pyne Honor Prize.

Unfortunately, when my sixth-grade teacher said “Negroes” had limited mental abilities he was not alone. In fact, around 1960, I remember numerous articles and public statements about how genetics were the primary factor determining a person’s intelligence, health, and chances for success in school, in life, and in certain athletic endeavors like golf, tennis, gymnastics, and marathon races. And, to support their beliefs, these people would point to statistics that seemed to support their position. For example, I remember articles describing various anatomical reasons for why blacks were poor long-distance runners. These reasons were proven to be false 28 years later when the first black won the Boston Marathon in 1988. Since 1988, when a Kenyan won the Boston Marathon, blacks have dominated the race winning 29 of the races, with 22 of the races being won by Kenyans. Now there are articles explaining why a given ethnic group in Kenya is genetically predisposed to win marathon races. And while epigenetics may not have a role in explaining who dominates Boston Marathon races, it does change the nature versus nurture debate.

This is because epigenetics explains how and why environmental factors can influence how our genes, formed over millions of years, can be silenced or activated to help us adapt to environmental changes that occur in less than a lifetime. Two studies about how the environment affects our genes are a study of agouti mice and the Overkalix Sweden study. 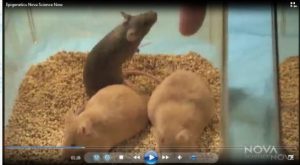 An agouti mice study is cited in a NOVA Science Now video you can access by clicking on the picture with the two yellow mice and one dark brown mouse. While the dark brown mouse looks very different from the other two, all three mice have the same genes. One of the shared genes is called the agouti gene. In the yellow mice, the agouti gene stays on all the time, causing the yellow color, obesity, and other health problems. In the dark brown mouse, the agouti gene has been turned off. To produce the brown mouse researchers fed a pregnant yellow mouse a diet rich in methyl groups like folic acid. This diet increased the likelihood that the agouti gene would be turned off in the offspring of the pregnant yellow mouse in most or all of her offspring. What is more, the coat color and propensity for being thin or overweight is passed on to the subsequent generations of mice. The brown coat color, and tendency to be thin, can be reversed to yellow, with a tendency to be overweight, by adding environmental toxins instead of nutrients to a pregnant mouse’s diet, thereby producing yellow offspring that tend to be overweight. The coat color and tendency to be overweight or thin are due to changes in the epigenome of the mice due to the diet of their pregnant mother. 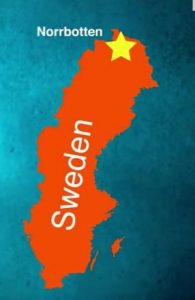 The Överkalix study, published in 2002, involved humans. The study utilized historical records, including harvests in Överkalix, a small isolated municipality in northeast Sweden. The study looked at data that was kept on a population in the far northern Sweden province of Norrbotten in the 19th century. Overkalix was so isolated that if there was not a good crop year people died. It turns out that in the late 1800’s this area experienced seven years of famine followed by a number of years of good harvests and abundant food. And, while the population in Overkalix that was affected was very small, consisting of 303 probands (the starting point for a genetic study of a family) 164 men and 139 women, its impact on the field of epigenetics has been huge. As it turns out, there were years in the 1800s when during times of drought and very little food, people were starving because the area was so isolated from the rest of Sweden. These lean years were sometimes followed by years in which crops were plentiful and people gorged themselves after suffering through the lean years. As public health specialists looked at the health effects, during the years when there was very little food, versus the years when there was an abundance of food, they found that men who were conceived and born during the lean years had fewer health issues and lived, on average, 6 years longer than the men who were conceived and born during the plentiful years. In addition, the grandsons and great-grandsons of the two groups had the same health and mortality patterns as the men conceived and born during the lean and plentiful years.

Scientists now believe that results, like those in the aforementioned studies, are due to a relatively new branch of science called epigenetics. Epigenetics says we can think of our genes as our hardware and our epigenome as our software. Like software, our epigenome tells our genes whether to be on or off. In genetics, “on” means active (expressed) and “off” means silent (not expressed). And, while turning genes on and off does not change them, it does affect them.

1. Unlike genes, which in nature can take thousands of years to change, epigenetic changes are not fixed, are reversible, and our environment can cause them.

2. Parents can pass epigenetic changes to a child, one generation after the next. For example, the diet of the female agouti mice cited above, affected the fur color and chances of obesity and various health problems of their offspring without changing their genes.

3. Severe and chronic stress, experienced during early life, can alter adult behavior, the behavior of their offspring, and increase the risk of depression in the adult and their offspring.

4. Epigenetic changes accumulate over the course of our lives. This is visible in the epigenome of identical twins. The gene expression profile of young twins is virtually indistinguishable. But, the gene expression of adult twins can show significant differences.

5. Epigenetics provides scientific evidence that nurture has a strong impact on nature.

Given the above facts, epigenetics has changed the debate over the impact of nature versus nurture. We now know that nurture can impact nature. Worded another way, we now know that what we eat, how much exercise we get, whether or not we smoke, and how much stress we are subjected to can change how our genes express themselves. And, this allows our genes, which are hard to change, to be affected by our environment.

In my next blog, I will discuss how epigenetics works.