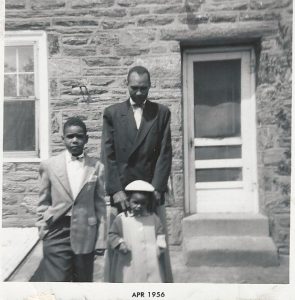 Our first home in Willow Grove, Pa., April 1956: Father Howard, little sister Linda, and me in our Sunday best.

In my last blog I discussed choices my parents made that allowed me to live and have a chance for a successful life.

In this blog I talk about challenges in school I overcome because others opened doors for me and I was willing to work hard after the doors were opened.

It happened because my parents supported me, my third grade teacher opened a door, and I was willing to work hard.

Without my third grade teacher opening a door and my parents support, I could have become an at-risk student getting in trouble in school instead of being challenged by my schoolwork because I did not do boredom well.

But my elementary school challenges did not end there.

In sixth grade I was a straight A student but my teacher recommended I be in a middle roster of classes in seventh grade instead of a roster of top students.

As my parents had twice before, first when I was on life support and again when I went to a segregated school, they fought for me and challenged the teacher’s recommendation. The teacher said I was recommended for the lower roster because it was a well-known fact that “Negroes” reached their potential by eighth grade and if I were in a roster with other straight A students it would be a waste of a top roster slot.

My parents changed the teacher’s mind and another door was opened.

The support of my parents and third grade teacher opened doors for me. And I strode through each door, strengthened by their belief in me – a belief that encouraged me to take on greater challenges and earn degrees from Princeton, Harvard and the Massachusetts Institute of Technology.

While my parents and third grade teacher opened doors for me, I realized there are many students who are not that lucky. I realized that without advocates, a student’s progress in school and life can be derailed and/or blocked by social pressures, well-meaning but clueless and/or biased teachers, and/or by the student’s efforts to relieve the boredom of their classes or cope with a fear of failure or being overwhelmed. And as I challenged myself to achieve throughout my education, I often thought about the many students who were not given the foundation of a belief in themselves as I was.

I realized that without advocates, many students could be at risk of having learning and lives derailed and doors closed forever – and this inspired my greatest learning journey: Creating the SELF Empowerment Program™ (SELF™), so all students could have the tools for success my parents and third grade teacher gave me.

In the next blog I will discuss some of my challenges and triumphs in middle and high school, like overcoming bigotry, and how they helped to shape my thinking about the need for programs to help at-risk students.